Whats In the Future?

Some say the future is full of promise. Others predict a dystopia full of uncertainty and threats from the growing number of groups who create markets to embrace this apocalyptic future.  A recent example was witnessed by the focus of attention put on the apocalyptic fervor created from the 2012 Mayan prophecy. Meanwhile, sects of major Christian religions interpret global events like the Japanese earthquake, The Indonesian tsunami, the Gulf Coast oil disaster, and the plethora of weather events, including hurricanes, tornadoes, droughts and other natural disasters as confirmation of the forthcoming Armageddon. However research from the late Zecharia Sitchin  (2007), suggests a different meaning of the word Armageddon. The discovery of an ancient site called Megiddo at the foot of Mount Megiddo (Har – Megiddo in the original Hebrew text), from his scholarly view, points to the expression of Armageddon as a term derived in reference to Har-Megiddo, a place associated with annihilation by those with knowledge of the region’s destructive historic past as a prominent ancient battleground.

Adding to the end-of-times frenzy, are the many indigenous community elders worldwide who also share similar beliefs in end of time outlooks from a little more optimistic vantage. The native peoples view is representative of a metaphoric death of one age or completion of a cycle; and the birth or beginning of a new one. The future in other words can either be bleak or promising contingent upon an individual’s attitude.

For example, many anticipated a positive change with the replacement of the Bush administration that left our economy in a total wreck by the historical election of the first black US president, Barack Obama who won the election on the message of change. However according to former Governor Jesse Ventura (2009) upon taking the oath of the oval office in his first term; the only missing person from the old Democratic administration was Robert Byrd (Ventura, 2009).  One perspective views the current administration as a positive change, while another indicates that the only change was the actor in the leadership role, while the other acting agents remained the same.

Sommers (2012), suggests that the direction of our future is subject to social, economic and environmental disasters that can spring from the following four constant and predictable forces of change: (1) resources, (2) technology, (3) demographics, and (4) governance. Trends can help guide these forces of change in a somewhat predictable manner. What is certain however is that the outcomes are unpredictable (Sommers, 2012). In other words, our future will be shaped from the availability of resources that sustain our population and the technology that helps transform raw materials (e.g., ovens to cook meals). In addition to these assets, is the interaction of demographics in the form of the productiveness of a society, which includes the right combination of age, gender and genetic diversity. These are further required components after resources and technology. How successful a group or society will be is contingent upon how productive they are. The the final aspect to a positive future is the governance that comprises the distribution and management of the group’s assets, resources, technology and people in the rule of law and marketplace. Understanding these concepts and how they interact is the key to help us gage the possibilities of knowing where and how to create a brighter future.

In conclusion, Harper and Light (2011) offer the following advice to help us adjust to change to better equip ourselves as sculptors and active participants in bettering our future: (a) expect change, (b) understand change, (c) change ourselves and (d) help make a difference in the world by doing our part to be of service (Harper & Leicht, 2011).  These four tips, in addition to a conscious awareness of our connectedness to each other and our environment, are essential elements for shaping the globe into a more harmonious place of existence.

““If quantum mechanics hasn’t profoundly shocked you, you haven’t understood it yet. Everything we call real is made of things that cannot be regarded as real.” – Niels Bohr, a Danish Physicist 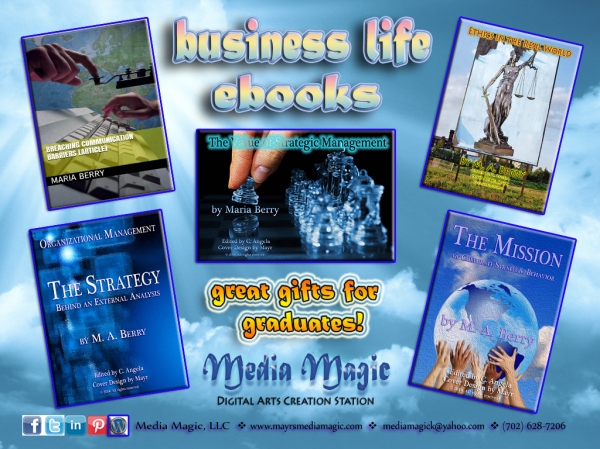 For more information on Media Magic, our digital publications, or to purchase any of our accelerated learning Business Life titles, please visit our website at: